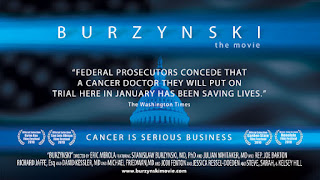 Burzynski, the Movie is the story of a medical doctor and Ph.D biochemist named Dr. Stanislaw Burzynski who won the largest, and possibly the most convoluted and intriguing legal battle against the Food & Drug Administration in American history.

His victorious battles with the United States government centered around Dr. Burzynski's gene-targeted cancer medicines he discovered in the 1970's called Antineoplastons, which have currently completed Phase II FDA-supervised clinical trials in 2009 and could begin the final phase of FDA testing in 2011–barring the ability to raise the required $150 million to fund the final phase of FDA clinical trials.

When Antineoplastons are approved, it will mark the first time in history a single scientist, not a pharmaceutical company, will hold the exclusive patent and distribution rights on a paradigm-shifting medical breakthrough.

Antineoplastons are responsible for curing some of the most incurable forms of terminal cancer. Various cancer survivors are presented in the film who chose these medicines instead of surgery, chemotherapy or radiation - with full disclosure of medical records to support their diagnosis and recovery - as well as systematic (non-anecdotal) FDA-supervised clinical trial data comparing Antineoplastons to other available treatments—which is published within the peer-reviewed medical literature.

One form of cancer - diffuse, intrinsic, childhood brainstem glioma has never before been cured in any scientifically controlled clinical trial in the history of medicine. Antineoplastons hold the first cures in history - dozens of them. [ANP - PubMed 2003] [ANP - PubMed 2006] [Rad & other - PubMed 2008] [Chemo/Rad - PubMed 2005]

This documentary takes the audience through the treacherous, yet victorious, 14-year journey both Dr. Burzynski and his patients have had to endure in order to obtain FDA-approved clinical trials of Antineoplastons.

Dr. Burzynski resides and practices medicine in Houston, Texas. He was able to initially produce and administer his discovery without FDA-approval from 1977-1995 because the state of Texas at this time did not require that Texas physicians be required to adhere to Federal law in this situation. This law has since been changed.

As with anything that changes current-day paradigms, Burzynski's ability to successfully treat incurable cancer with such consistency has baffled the industry. Ironically, this fact had prompted numerous investigations by the Texas Medical Board, who relentlessly took Dr. Burzynski as high as the state supreme court in their failed attempt to halt his practices.

Likewise, the Food and Drug Administration engaged in four Federal Grand Juries spanning over a decade attempting to indict Dr. Burzynski, all of which ended in no finding of fault on his behalf. Finally, Dr. Burzynski was indicted in their 5th Grand Jury in 1995, resulting in two federal trials and two sets of jurors finding him not guilty of any wrongdoing. If convicted, Dr. Burzynski would have faced a maximum of 290 years in a federal prison and $18.5 million in fines.

However, what was revealed a few years after Dr. Burzynski won his freedom, helps to paint a more coherent picture regarding the true motivation of the United States government's relentless persecution of Stanislaw Burzynski, M.D., Ph.D.

Note: When Antineoplastons are approved for public use, it will allow a single scientist to hold an exclusive license to manufacture and sell these medicines on the open market—before they become generic—leaving PhRMA absent in profiting from the most effective gene-targeted cancer treatment the world has ever seen.

Posted by Lip Ink international at 11:32 AM